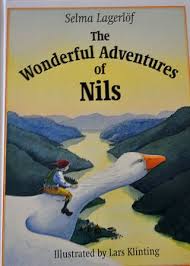 Meet Nils, a boy who is cruel to animals, lazy and mischievous. He screws up with a wrong creature: an elf. Nils is being very disrespectful, mistreating the elf. And then, POOF! The elf bewitches and turns Nils into the same size as himself. After that, the boy hops on the back of a farm’s tame geese. Both of them decides to join a flock of wild geese as a part of their seasonal migration.

Slowly, Nils’ personality changes into a kind and nice boy. Being the size he is now, he doesn’t like to be cruel to animal anymore. He is deeply changed as he has a wonderful adventure with the geese. One of the wild geese has an arrogant personality, but as time goes by, the boy is starting to know that the geese are actually very protective to one another.

The setting of the story is full of nature. The boy experiences the horror of storms at sea, the peaceful green grass, and the beauty of the land from high up in the sky. Nils meets wild ducks, crows, mice, an eagle, and a dangerous fox. In the elf-sized, now he can understand what the animals talk about; and he can communicate to them. Imagine this, the books is written in 1906. I think Lagerlöf is trying to promote the natural harmonious and balanced.

Besides the animal tale, there are human tales who are the inhabitants of rural area. There’s a story about the old woman who dies alone. There’s a sad story of Osa, the goose girl and her brother Mats. There’s also the story of the old musician from Stockholm and the King.

Here is my favorite quote from the story itself:

“Then he understood that the big, checked cloth he was traveling over was the flat land of southern Sweden; and he began to comprehend why it looked so checked and multicolored.  The bright green checks he recognized first; they were rye-fields that had been sown in the fall, and had kept themselves green under the winter snows.  The yellowish-gray checks were stubble-fields – the remains of the oat-crop which had grown there the summer before.  The brownish ones were old clover meadows: and the black ones, deserted grazing lands or ploughed-up fallow pastures.  The brown checks with the yellow edges were surely beech-tree forests; for in these you’ll find the big trees which grow in the heart of the forest, naked in winter; while the little beech-trees, which grow along the borders, keep their dry, yellowed leaves far into the spring.  There were also dark checks with gray centers: these were the large, built-up estates encircled by the small cottages with their blackening straw roofs, and their stone-divided land-plots.  And then there were checks green in the middle with brown borders: these were the orchards, where the grass-carpets were already turning green, although the trees and bushes around them were still in their nude brown bark.”

It speaks about the scenery the boy sees as he rides on the goose gander’s back.

The whole book means to tell children about the wonders of nature and folktales of the several provinces of Sweden into the story. As I compare this book to Beatrix Potter’s The Tale of Peter Rabbit, Peter Rabbit seems more “fictional”; although they are actually both children books. Why did I say like that? Because I think, this is a love story about Sweden. Lagerlöf really adores her country and describes the land in great detail. Her explanations are alive, rich, and vibrant. I believe it is coming from her deepest heart.

Selma Ottilia Lovisa Lagerlöf is a Swedish author. She is the first female writer to win the Nobel Prize in Literature in 1909 in appreciation of her vivid imagination and spiritual perception that characterize her writings. It’s so wow, impressive! In 1904, the Swedish Academy had awarded her its great gold medal. In 1914, she became a member of the Academy. For both the Academy membership and her Nobel literature prize, she was the first woman to be so honored. She is most widely known for her children’s book The Wonderful Adventures of Nils.

One thought on “The Wonderful Adventures of Nils by Selma Lagerlöf”